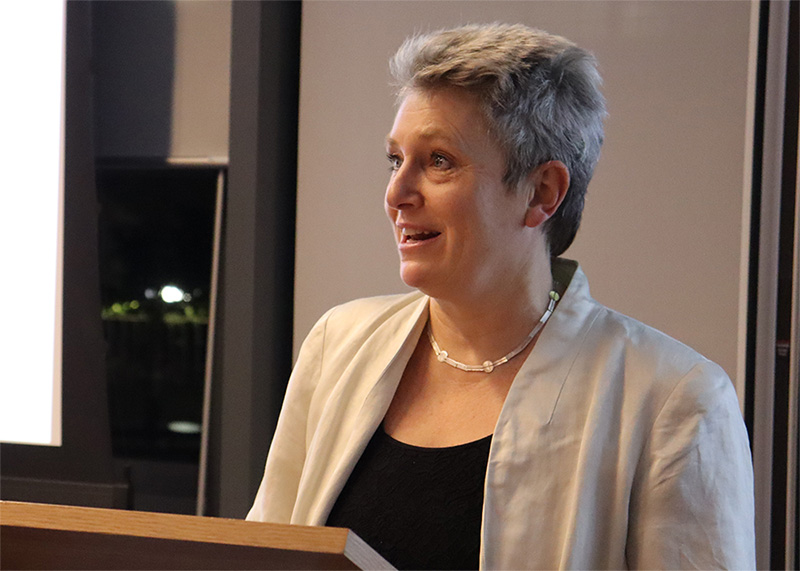 The venture capitalist honoured by the Queen for her leadership of the world’s first COVID-19 vaccination programme has hailed the role of the Royal Free London NHS Foundation Trust in the national response to COVID-19.

Dame Kate Bingham DBE, former leader of the UK vaccine taskforce, heaped praise on the Royal Free London for its proud tradition as an innovator in the health sector and singled out its research work, including its part in the world’s first COVID-19 human challenge study.

Dame Kate said: “The Royal Free Hospital was the first to admit women to train as doctors, the first hospital to accept cholera patients at a time when they were being turned away from other hospitals, and to take inventiveness incredibly seriously. So, to me, there was no surprise that the Royal Free played a critical role in the fight against COVID.”

Dame Kate made her comments at the prestigious Marsden Lecture, a long-established annual lecture series where prominent experts are invited to discuss issues and challenges of significance in the world of academia and healthcare. It was hosted this month by the Royal Free Charity and chaired by the Royal Free London.

“I took part in the Novavax trial with Dr Fiona Burns, which was a fantastic example both of how the Royal Free worked but also how well the UK system worked to run these trials. That was then going to become the biggest vaccine trial that was ever run in the UK, and not only was that trial enrolled, it was enrolled in six weeks. We enrolled and completed the study before America even started. So as an example of nimbleness and the effectiveness, both here and around the UK, it was phenomenal.

“More than 8,000 people, even during the pandemic, were recruited into clinical trials [at the Royal Free London], a third into COVID trials and that is a huge accolade because that is how you actually push forward the knowledge of medicines and how you actually research innovations into treatment of patients.

“There is no question that these trials have altered the course of how COVID is treated.”

In her lecture – entitled the application of a venture capital approach to addressing the COVID-19 global health crisis and the pioneering role of the Royal Free London NHS Foundation Trust in responding to the pandemic – Dame Kate recalled the initial setting up of the vaccine taskforce and spoke of some of the challenges facing the team.

Dame Kate was awarded a DBE in the Queen’s Birthday Honours last year for services to the procurement, manufacture, and distribution of COVID-19 vaccines. Eight billion doses of COVID-19 vaccines have now been made worldwide with a current 1.3bn global monthly run rate.

The Royal Free Hospital was chosen as one of 50 ‘hubs’ leading the way on the biggest immunisation programme in history in December 2020, vaccinating thousands of patients, staff and members of the public. The Royal Free Charity Recreation Club, supported by Royal Free Charity volunteers, was opened in January as a vaccination centre for the public, run by local GPs amid a nationwide push to ramp up the speed of the vaccine rollout.

In partnership with Saracens Rugby Club, the RFL also hosted a mass vaccination centre at the StoneX Stadium which delivered more than 40,000 COVID-19 jabs. The centre was supported by volunteers, including those from the Royal Free Charity.

Dr Chris Streather, Royal Free London group chief medical officer, said: “It was a real privilege to welcome Dame Kate Bingham to our annual Marsden lecture and listen to her fascinating and inspiring talk. The Royal Free London is incredibly proud of the part our staff have played in responding to the pandemic and supporting the ground-breaking research that has been taking place at an unprecedented pace and scale.”

Jon Spiers, chief executive of the Royal Free Charity, said: “It was fantastic to see an entrepreneur as illustrious as Dame Kate paying tribute to the Royal Free London’s heritage of innovating and paving the way. It felt very fitting that she made her comments in the new Pears Building, a symbol of what we can achieve when clinical and research excellence combine with philanthropy to deliver one of the world’s largest purpose-built centres of research for immunology.”

The event is available to watch on the Royal Free Charity’s YouTube channel.

Dame Kate on the challenge of creating a new vaccine quickly

“The chances of this working were very slim. It didn’t mean we shouldn’t do it, but the cards were definitely stacked against us.

“No vaccine at that point had ever been developed against any human coronavirus. We had no route for a vaccine against this class of virus that had ever been successful. And of course, we knew nothing about the virus, we knew very little about the biology and the modes and methods of infection.

“The history of vaccine development was not on our side; the quickest ever vaccine that had been developed before was the latest mumps vaccine which took five years from definition of sequence to a vaccine. That’s not a very compelling prospect when the whole country is in lockdown.

“Somehow, we had to find vaccines that would be safe, that would work on the elderly, with formats that had never been tested. So those were the challenges we faced at the beginning of last year.”

On applying a venture capital approach to finding a vaccine

Dame Kate explained how a venture capital approach for the UK’s vaccine task force meant using knowledge of industry networks and working as partners, not adversaries, as well as accepting that losses are inevitable as you build your portfolio.

“We had an interesting portfolio that we were putting together – it had to be a portfolio because the chances of any of these vaccines making it were 10-15 per cent, you’d need quite a lot of different vaccines to be sure that some would be successful within the portfolio.

“We balanced those vaccines that would be quick to develop but about which we had no really good data and bookended those with vaccines we understood a lot more about but would be slower to develop.

“We spent £900 million, which in the grand scheme of things is not very much money, to pay upfront for the manufacturing scale up and the clinical trials from a total budget £3.7 billion. It worked out about £10 a dose.”

On recruiting a record number of patients into clinical trials

The UK vaccine task force led by Dame Kate Bingham created a national citizen registry of volunteers for trials and signed up an unprecedented 500,000 people.

“We set up a national citizen registry on the NHS website that enabled anybody sitting at home to register on the website to consent to be approached about clinical trials. We had to make sure that the people who signed up were representative of those people who were most at risk. It was no good having people who were 25 and fit, we needed to have this enriched for elderly and frail.

“We ended up with over half a million people signed up and 35 per cent were over the age of 60. It meant when we had trials ready to open, we had a pool of people who had already taken at least the first step towards saying yes, they would be willing to step up.”

Dame Kate has 30 years’ experience in the biotechnology sector, and her investments have helped launch new treatments for inflammatory and autoimmune disease and cancer.

Dame Kate graduated in biochemistry from the University of Oxford and spent two years working in management consultancy before undertaking an MBA at Harvard and joining the SV Health Investors in the early 1990s; she co-leads the company’s biotech division. head of the UK Covid Vaccines Taskforce, a position she held for seven months, to the end of last year.

The Marsden Lecture is named in honour of Dr William Marsden, who founded the Royal Free Hospital in 1828. He was moved to act after he witnessed the death of a young woman who was refused admission to hospital because she was unable to pay for treatment. Determined that poverty would not be a barrier to accessing healthcare, Dr Marsden rallied his friends and colleagues to contribute to the costs of establishing what we know today as the Royal Free Hospital.