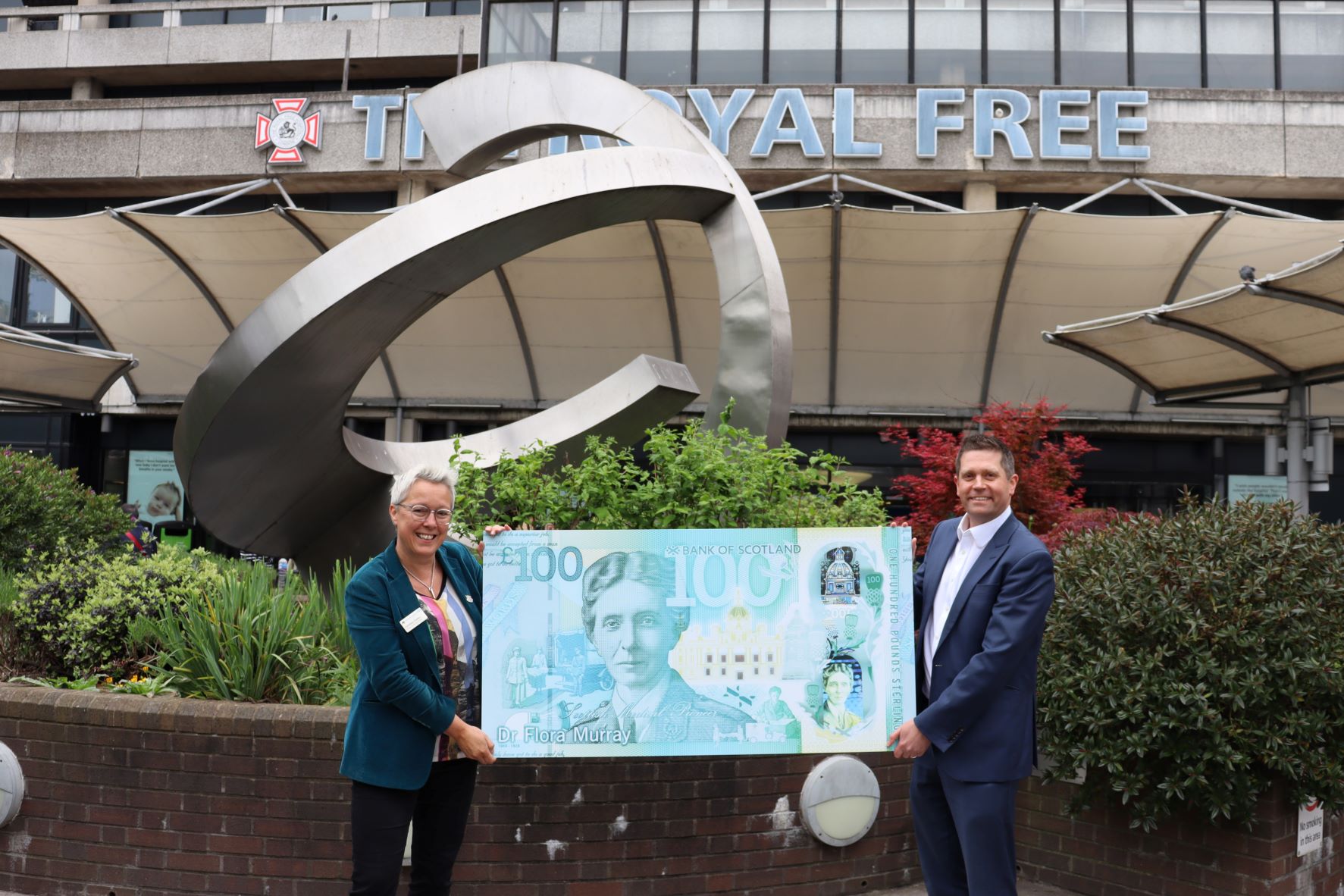 A charity auction of banknotes with sought-after serial numbers has raised approximately £120,000 for the Royal Free Charity.

The new Scottish £100 polymer banknote entered circulation last week (9 May). It depicts medical pioneer and suffragette Dr Flora Murray CBE, who trained as a doctor at the Royal Free Hospital in London.

Born in Dumfries, Dr Murray qualified as a doctor at the London (Royal Free Hospital) School of Medicine for Women in 1905. She worked as a medical officer and anaesthetist before setting up a series of military hospitals for wounded soldiers.

To mark the new £100 banknote entering circulation, the Bank of Scotland auctioned off 186 limited edition versions raising a grand total of £241,080. The proceeds of the charity auction are to be shared equally between the bank’s charity partner Mental Health UK and the Royal Free Charity.

Jon Spiers, Royal Free Charity chief executive, said: “We were delighted to host a visit of the project team who led on the design and delivery of the new note. The Royal Free Hospital’s record of support for women practising as doctors at a time when it was deemed unsuitable is a story that deserves retelling. We’re very proud that Flora has been recognised in this way, and we’re extremely grateful to the Bank of Scotland for their generous donation.”

The Royal Free Charity owns and curates the art collection on display across the Royal Free London NHS Foundation Trust. Today. Dr Murray’s portrait by Francis Dodd hangs in the Royal Free Hospital and it is this image that graces the Bank of Scotland’s new £100 note.

In 1912, with her lifelong partner Dr Louisa Garrett Anderson. she founded the Women’s Hospital for Children in Harrow Road, London to provide healthcare for working class children.

A committed member of the Women’s Social and Political Union, she supported suffragettes recovering from hunger strikes and injuries acquired during protests.

With the onset of World War I in 1914, Dr Murray and Dr Garrett Anderson founded the feminist organisation ‘Women’s Hospital Corps’ and opened two military hospitals in France, staffed entirely by female suffragettes. The hospitals were such a success that in 1915, the British war office invited them to set up a hospital in London for returning soldiers. The two women were provided with premises in London which they transformed into the Endell Street Military Hospital, the first in the UK established for men staffed by female medical professionals. The hospital treated more than 26,000 seriously injured soldiers.

As well as clinical practice, Endell Street doctors carried out a significant amount of clinical and laboratory research, with seven papers being published in The Lancet. In 1917, Drs Murray and Garrett Anderson were both awarded a CBE for their work and medical efforts during the war.

Caroline Clarke, Chief Executive of the Royal Free London NHS Foundation Trust, said: “As the first institution in Britain to train women in medicine, the Royal Free Hospital drew aspiring female doctors from across the globe; we’re immensely proud that the Bank of Scotland and the Royal Free Charity have worked together to give Flora her rightful place in the pantheon of British medical history.

“Almost a century since her death, Flora’s story is a reminder of the huge debt of gratitude we owe to those early agitators who refused to accept the limitations imposed by a society that didn’t believe women could or should be doctors, physicians and surgeons.

“Then and now, we embrace the pioneers, the innovators, and the game-changers.”

Philip Grant, Chairman of the Scottish Executive Committee, Bank of Scotland, said: “Bank of Scotland has issued bank notes showcasing our country’s incredible history for more than 320 years and now we’re putting the contribution of exceptional Scottish people into the spotlight too.

“We are so proud that our new £100 polymer note commemorates the remarkable work of Dr Flora Murray who, alongside being a medical pioneer, spent her adult life fighting for women’s rights as a suffragette.”

After the war, the two women lived together in Penn, Buckinghamshire until Dr Murray’s death in 1923. Dr Murray is buried in a churchyard in Penn where their joint headstone declares: “We have been gloriously happy”.

On the reverse of the first £100 green note is a striking portrait of Dr Murray, painted by Francis Dodd in 1921. It is accompanied by an image of female stretcher bearers outside Endell Street Hospital, London, bringing to life the significance Dr Murray had on the medical world and the fight for women’s rights.

The front of the new note portrays the Scottish novelist and poet Sir Walter Scott, alongside an image of The Mound in Edinburgh as the current £100 cotton note does today.

The note has important security features which include an anti-counterfeit ‘window effect’ – transparent windows within The Mound frontage and a transparent vertical stripe – on the front of the note. Inside the vertical stripe is a multicoloured holographic foil strip which displays the image of Dr Murray, the bank’s logo, and ’£100.’ The foil also displays a ‘Northern Lights’ effect, with stars and colours resembling the phenomena appearing when the note is tilted.

Until the 1870s, women in Britain could not become doctors. They were not admitted to British medical schools and not allowed to take the exams to get a licence to practise. The London School of Medicine for Women opened in 1874 to train women as doctors. While they could study medicine, they weren’t allowed to practise until the Royal Free Hospital became the first British institution to admit women, giving them valuable real-life clinical experience.