Stones in the bladder were a common and very painful condition in Europe until the end of the 19th century. Amongst famous sufferers were Samuel Pepys and Louis XIV of France. Both underwent surgery without anaesthetic and lived to tell the tale. The St Peter’s Trust took its name from St. Peter’s Hospital in central London, which was established in 1860. It was one of several specialist hospitals founded at that time by groups of doctors with particular areas of interest. The Hospital for Sick Children in Great Ormond Street (1852) was another. One of the founders’ ideas was that specialisation in one field would attract more patients, knowledge would be gained and treatments improved.

As the workload increased, the hospital was moved to a larger site in Covent Garden, funded by an anonymous donation in 1873 of ten bank notes for £1000 each! With the foundation of the National Health Service in 1948, it was combined with two other hospitals in Covent Garden (St Paul’s and St Philips) and with a Postgraduate Institute, to form a specialist group for Urology and Nephrology.

There was no extra money for research, but with the support of individual donors and freely given time, huge advances were made. The group was unique in Britain and, indeed, there was no real equivalent elsewhere in the world. As a result, it attracted highly skilled specialists onto its staff and doctors came from all over the world to train. Similarly, the research and teaching programmes in the Institute expanded.

In 1969, a fourth hospital, The Shaftesbury, was added to the group. This gave extra beds and allowed considerable enlargement of the teaching activities of the Institute. The research laboratories were expanded in the St Pauls building.

The need to formalise fund raising for research led to the formation of the St Peter’s Trust in 1970. Over the years, research has become progressively more expensive. Major projects may cost thousands or even millions of pounds. Although £1.2 million was raised to found a professorial chair of nephrology in perpetuity, a Trust such as St Peter’s could not raise funds at this level year after year. The main objectives now are to fund ‘seed’ projects, from the data of which bigger applications can be made; and to support the stipends and research of PhD students.

In the 1980s it became clear that it was impractical to have the clinical and research work on four sites. A search was made for a building that could hold all of them and allow some expansion. Unfortunately, this proved to be too expensive. The hospitals and the Institute were, therefore, moved to the Middlesex Hospital and Medical School in 1990. This worked well until it was decided that the Middlesex would be merged with University College and Hospital!

In 2006, Nephrology was moved to the Royal Free Hospital and Urology went to the newly built University College Hospital. The medical school did not want to support the Institute in its then existing form. It was gradually wound down and its research units were merged with similar existing groups within the medical school.

The St Peter’s Trust survived all of these changes and still raises money and funds both for research and the St Peter’s Chair of Nephrology. As the salary of the Professor is shared with the Medical School and Hospital, the surplus money is being used to fund a PhD student to work in his laboratory. 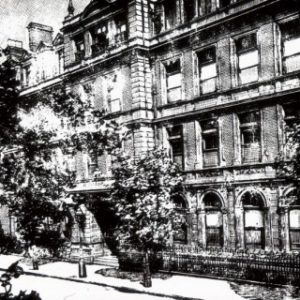 In 1969, a fourth hospital, The Shaftesbury, was added to the group. This gave extra beds and allowed considerable enlargement of the teaching activities of the Institute. The research laboratories were expanded in the St Pauls building. Today it is a hotel. 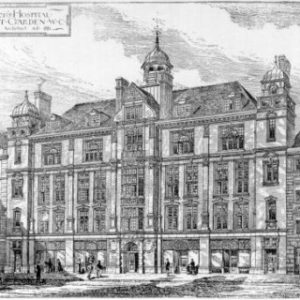 The original St Peter’s Hospital was in Henrietta Street, Covent Garden in 1860. It was from this specialist hospital that St Peter’s Trust took it’s name. Today it has been converted into flats.

Visit some of our past research projects and achievements.