Making a difference – in so many ways

Volunteering had been in Veronica’s blood for a long time before she heard from a friend about the Hampstead Gown Factory project last summer and started helping in the cutting-out room.

“I’ve always done a lot of volunteering over the years, partly through the City investment bank where I used to run the corporate social responsibility programme and was involved in East London and Camden schools but also at the Olympics, which was fantastic.

“When the pandemic happened I was furloughed from my charity job, hated being stuck at home and wanted to help, so when a friend suggested the gown factory project, I signed up and cut endless pieces of fabric for the PPE we were making – it was great fun, very well organised and I enjoyed it hugely.”

She decided to retire at the end of last year so once she had more time, although already volunteering for FEAST, a charity which makes meals for those in poverty, she became a volunteer at the RFC’s vaccination centre at the Rec Club. 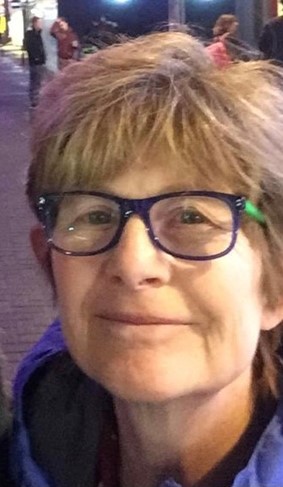 “I work as a marshal or on the reception desk and it’s great to feel helpful and part of the team,” she said. “It was then decided to invite volunteers back into other areas including the wards and the bereavement office and although I wasn’t sure about the latter, I decided to give it a go.”

So as well as doing at least one session a week at the vaccination hub, Veronica is now also doing two sessions a week at the bereavement office, either helping to answer the phones and explaining to families how to register a death on Mondays, or on Thursdays leading a new project to send condolence cards to families.

“This is an unusual service which aims to build better links with families who have been bereaved. We send a card the week after the person dies – which is the bit I do – and a few weeks later a member of staff contacts the family again to offer further support.

“I feel part of the team even though I’m only there twice a week and people have been very helpful and nice to me.”

When not at one of her many volunteering jobs, either for the charity or elsewhere, Veronica is a governor for a school in East London and likes swimming, walking and going to the cinema – which she looks forward to being able to do again.

“What I get out of it is feeling that I’m doing something useful and valuable and being able to meet and talk to other people – and getting out of the house!”