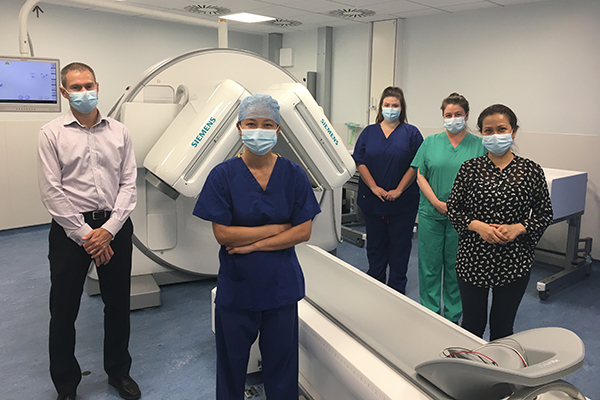 A research team funded by the Royal Free Charity to investigate if scans can diagnose kidney cancer instead of invasive surgery has been awarded £250k to scale up the project in multiple hospitals across the UK.

In the first study of its kind in the UK, doctors at the Royal Free Hospital – the country’s largest specialist kidney cancer centre – investigated if, instead of a biopsy, a nuclear medicine scan known as a sestamibi scan could be used to detect benign kidney tumours that require no further treatment.

Following the success of the trial, the team has now secured additional funding for a multi-site feasibility study from the National Institute for Health and Care Research (NIHR).

“The Royal Free Charity and St Peter’s Trust played a critical role in enabling the pilot study to demonstrate the potential of using sestamibi scans in the diagnostic pathway for patients diagnosed with kidney tumours in the NHS.

“The initial seed funding meant that we could provide evidence to the NIHR of effectiveness and crucially, patient acceptability to have this scan. I am thrilled that the NIHR Research for Patient Benefit is supporting the next stage of seeing if other centres can incorporate this scan in their patient pathways and whether clinicians need additional training to interpret these scans effectively.

“The diagnosis of kidney tumours continues to increase steadily, and with up to 30% of kidney tumours being benign, this project really has the potential to have a huge impact on patient care by providing an alternative to biopsy and reducing unnecessary invasive surgery.”

Kidney cancer affects more than 13,000 people in the UK each year but currently the only way to confirm if a kidney tumour is benign or cancerous before surgery is to have a biopsy – which involves a long needle being inserted through the skin into the tumour to take a tissue sample for analysis.

A biopsy needs an injection of local anaesthetic and can have side-effects such as pain and bleeding. Many hospitals do not offer renal tumour biopsy, so many patients go straight for surgical removal of the tumour.